This in-depth research article aims to provide a conclusive directory of statistics and data pertaining to the electric vehicle industry and an in-depth analysis of the EV market as a whole, as well as the global EV outlook as of 2022.

Electric vehicles (EVs) are rising as their production and general usage exponentially increase with each year, and the US electric vehicle market is growing in response.

Replacing conventional fuel with electricity as a way to power vehicular transportation isn’t a recently contrived concept; however, the practicality and economic benefits of EVs are becoming more favorable to consumers. With predictions of electric cars taking up more than 30% of all car sales in 2030, electric car future predictions look more than favorable.

EV market stats indicate that the total market value for electric cars is close to 280 billion USD as at the end of 2021.

Of all the countries worldwide, China was the leading EV manufacturer statistically speaking. They produced almost 8 million EVs in 2021. Europe was the second largest manufacturer, with about 6 million EVs.

The model type more prominent than others in all global markets was the SUV, which had the most available models in China, Europe, and the US. The second most popular model type overall was the medium car.

In China, there was a higher number of small car models compared to large cars and crossovers than in Europe and the US.

What Percentage of Vehicles are Electric in the World?

The Hedges Company Automotive Research team calculates there are about 1.446 billion cars in the world as of 2022.

Since the number of EVs likely falls a few million over 16.5 million (the sales of 2021), the global percentage of electric cars in the world is only about 1.2 – 1.4% of all vehicles.

The Alternative Fuel Data Center shows over 57,000 public electric vehicle charging stations in the US and Canada. Around 50,000 of those stations were in the US. 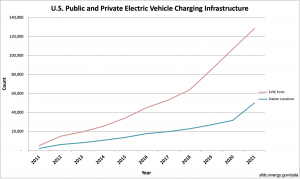 Overall, there has been a 2383.5% increase in electric charging stations over the past ten years.

US Public and Private Alternative Fueling Stations by Fuel Type

As made evident by the AFDC graph below, there have been more electric charging stations than any other alternative fueling station since 2012. 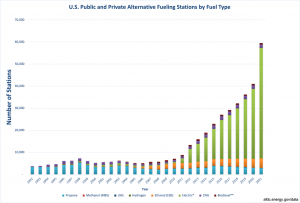 The biggest jumps in electric power stations were from 2010 to 2011 and from 2011 to 2012 (over triple each year). Afterward, there was a steady rate of exponential growth.

Out of the nine alternative fueling stations, only four existed in 1992. Since then, four more have been introduced, including electric, while methanol stations have been completely eliminated.

From 1992 to 2021, there was an incremental increase in alternative fueling stations by about 1614.1%, with the vast majority resulting from electric charging stations.

The IEA commentates that electric vehicle sales in 2021 reached 6.6 million, double what it was the previous year. This number accounted for almost 9% of the global market, a 300% increase from 2019.

71% of these sales would be BEV (battery electric vehicles), and 29% would be plug-in hybrids.

Ranking the electric car sales worldwide in 2021 by brand would put Tesla on top, followed by VW Group and BYD. From the previous year, Tesla saw an 87% increase, VW saw an 80% increase, and BYD saw an astounding 225% increase.

Of all BEV and PHEV models, the Tesla Model 3 (a BEV model) had the highest volume of global deliveries.

As indicated by the above chart, sales have more than doubled in China between 2020 and 2021. Seeing as how they have the highest electric vehicle sales per year and are the leading manufacturers in the industry, this growth is completely probable.

The second biggest player in the industry was Europe. While they did not see quite as many car registrations or as high of a sales growth as China, they did experience a large rise in sales.

Even though the US is lagging behind other global EV markets, it has seen a huge amount of growth from 2020 to 2021.

EV Sales in the US

Although the US doesn’t have as big of a market for EVs as China or Europe, production and sales are still on the rise. The following statistics were retrieved from the Argonne National Laboratory:

The majority of these HEVs were sold by Toyota, accounting for 56.7% of sales. On the other hand, Prius only represented roughly 1.7% of all US HEV sales during the month. This marked a 73.7% decrease from the previous year for Prius.

The total number of PHEVs and BEVs sold in 2022 amounted to 501,747 units sold from January to July.

The graph caps out at 100,000 EVs, but the state of California actually had roughly 563,070 registered vehicles. The following chat contains the actual numbers of each state.

Of the 6.75 million BEVs and PHEVs sold in 2021, about 3.4 million of them were sold in China. Comparatively, China sold about 1.4 million the prior year.

US EV Sales Percentages of Total Vehicle Sales By Brand

According to reports driven by Experian, Tesla is the leading EV sales brand in the US, holding 69.95% of market shares.

Nissan had the second highest percentage of market shares with 8.51%, and Chevrolet was third with 7.15%.

Tesla has the highest market share percentage in all states except for Alaska, where Nissan holds 40% of the state’s market shares.

This number has increased exponentially since 2010 when electric cars only held about .01% of the market.

As global efforts are pushing toward more renewable sources of energy, this trending growth for EVs can expect to continue upward in the coming years.

According to a 2022 InsideEVs Q1 report summary, Tesla has the highest global electric vehicles market share ranking with 15.5% (310,411 units sold), followed not far behind by BYD, which has a 14.3% market share ranking. This includes BEVs and PHEVS.

For the global EV market share by company, a Mordor Intelligence industry report predicts that the global revenue for electric cars will reach 1 trillion USD by 2026. This would be a 357% increase from the 2022 market value of 280 billion.

Furthermore, IHS Market has calculated that over 50% of all EVs will be produced in Asia, 43.8% of which will be from China. It is believed that Japanese and Korean manufacturers will be slightly over 11% of the industry.

Also, in 2030, it is predicted that there will be over 25 million EVs in operation (source: evadoption.com) compared to 2022, which will have approximately 3 million by the end of the year, clearly displaying the growth of electric vehicles.

Below you can find some strong insights in regards to EV growth projections.

Predictions suggest that 23% of new vehicles sold will be EV.

As per the Net Zero Scenario, the global EV stock will reach 350 million vehicles in 2030. This figure does not include two and three-wheelers. Thus EVs will form 20% of the total volume of cars in the world. In 2030, there will be over 65 million vehicles sold, which will be a sales share of almost 60%.

Overall, the electric vehicle forecast for 2030 expects to see a steady slope of growth, with 33%, as global efforts attempt to make the switch to more economical fueling. These efforts are imperative to reducing overall greenhouse gas emissions and converting the world to a more sustainable source of energy.

With China in the lead as the country with the highest market share of EVs and Tesla as the leading manufacturer, electric vehicle data shows exponential growth in the past five years. Since their rise in popularity starting in 2010, they have quickly become the number one alternative fueling method for cars. Thus, the electric vehicle outlook is strong, as predictions say that 33% of vehicles sold will eventually be EV.

Despite America lagging behind China and Europe in EV sales and manufacturing, there has still been a high degree of development in 2020 and 2021 since the percentage of electric cars globally is 1.2 – 1.4% of all vehicles, so electric vehicle projections are favorable. 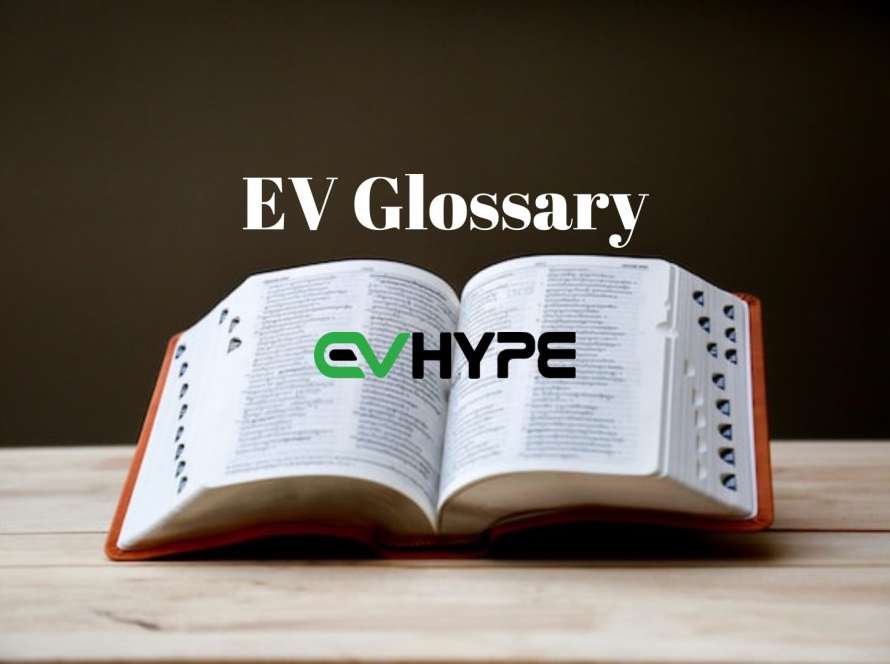 EV Terminology Glossary: All Terms You Need To Know